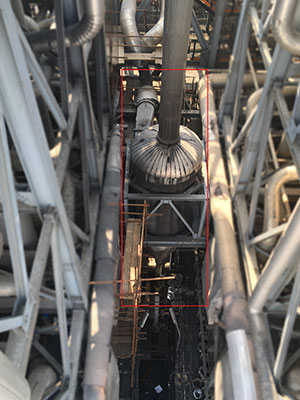 Decoking cyclones are usually used in olefin and ethylene plants to eliminate or reduce emission of coke particles to atmosphere during decoking cycles of cracking furnaces.  Depending to country environmental regulation, maximum emission limit varies from 50 to 20 mg/Nm3.

In cacking furnaces, the pyrolysis of all the various hydrocarbon feedstock (e.g. ethane, naphta) involves dehydrogenation and condensation so that not only olefins are produced in the radiant coils but also coke which forms a progressively thickening layer in the course of time on the internal surface of the coil and the primary TLE’s. The coke layer tends to retard the heat transfer from the tube wall of the radiant coil to the feed passing through it. This results in a slowly increasing tube metal temperature as the thickness of the coke layer increase, eventually reaching the maximum allowable tube metal temperature.
Additionally, coke deposition results in a significant increase of the pressure drop over the radiant coil, which adversely affects the pyrolysis yield pattern through the increase of the hydrocarbon partial pressure.
The accumulation of deposits on the surface of the radiant coil and the TLE’s necessitates periodic cleaning to prevent overheating of the radiant coils and the TLE’s and to restore the original yield pattern. The coke layer on the inside tube surface of the radiant coils is removed by controlled burning of the coke deposits using a steam/air mixture, a procedure known as steam/air decoking. Decoking should also be carried out before each furnace shutdown, or before restarting. Shutdown of the furnace without decoking is not recommended. In time of decoking, the mixture of air/steam and coke is pushed toward decoking cyclone, where the clean air/steam is vented to atmosphere and the separated coke particles are fallen from cyclone bottom to a container for disposal.

Case study for HEURTEY Petrochem: CDF for Decoking cyclone design under 100% air/steam flow (left picture) and 200% flow; when all 2 furnaces are in decoking cycle. The aim of the study was to verify design of our cyclone to meet coke emission to atmosphere to less that 50 mg/Nm3 at 100% flow and keeping pressure drop less than 50 mbar. The right picture is the forcast emision during decoking period. 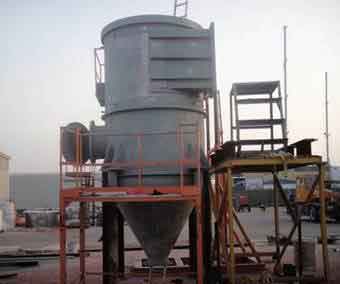 The mathematical prediction of emission rate during decoking period for the above case study: 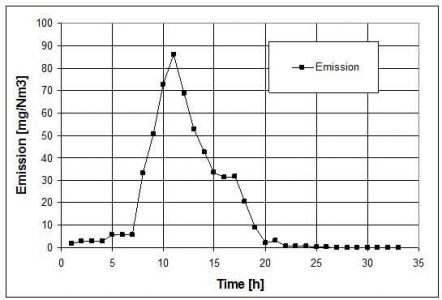